From Wellington to General Gordon of Khartoum

Familyrelatives.com is proud to announce the addition of 1,000,000 New Military Records spanning over 100 years.

This autumn marks the 201st anniversary of the beginning of the Peninsular War and to commemorate, the event Familyrelatives.com has added over 1 million army records covering a broad range from 1808 through to De Ruvigny's biographical record of World War I soldiers.

In 1808 Napoleon deposed the Spanish monarch and replaced him with his brother Joseph Bonaparte. Recognising the increased threat that Napoleon posed to Great Britain - British Forces under the command of Sir Arthur Wellesley, the future Duke of Wellington, landed in Portugal to check Napoleon's progress. After 5 years of prolonged and bitter campaigning Napoleon's forces were routed at the Battle of Vitoria, on June 21, 1813and the liberation of Spainwas complete.

The Peninsular Medal Roll is one of most valuable and unique records covering the conflict and sets out invaluable information about some of those who fought in the Iberian Peninsular. The following information is given in the database; Forename, Surname, Rank, Number of Clasps, Particulars of Clasps, Remarks, Regiment.

We continue to add to our First and Second World War collection and are excited to have added De Ruvigny's Roll of honour (2 volumes). The Roll of Honour includes the Biographies of over 25,000 men although we have currently uploaded 12,500 men who lost their lives in the Great War. The detail varies however, the example below gives a good indication of what kind of information can be found.

Furthermore a quick check of the World War I Army Deaths database details Alexander Akehurst - allowing you to order a certificate of his death. 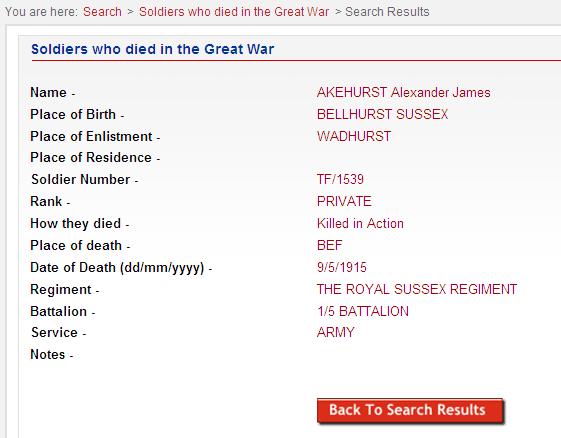 Thereby giving a better picture of individuals within the British Forces.

Charge of the Light Brigade

Lieutenant General James Thomas Brudenell, 7th Earl of Cardigan, KCB (16 October 1797 - 28 March 1868) commanded the charge of the Light Brigade of the British Army during the Crimean War. A colourful individual who by order of King William was dismissed from the 15th Hussars early in 1834, only to be  prosecuted for a duel with one of his former officers in 1841.

Perhaps his most infamous exploit was during the Crimean War on October 25 1854. He led the Charge of the Light Brigade at the battle of Balaclava in which almost half of his men were killed.. Although ascribed to a misunderstood order it was a heroic event that left its mark in history. On a more mundane note Cardigan's name is better known for the knitted waistcoat he wore in campaigns  and to this day it carries his name

A simple search in the 1850 Harts Army List shows that he was:

Please Note: that NEW DATABASE collections refers at time of going to press on Familyrelatives.com

The collection is part of over 650 million historic records available online to all members and visitors by way of an annual subscription of only £30.00 or US$50.00 at https://www.familyrelatives.com/index.php

The online collection contains the Rolls of Honour and death indexes produced by the Army, Royal Navy and Royal Air Force as well as biographies of individuals. The records provide an insight into the service and of the individuals themselves and the sacrifices they made. The Military records contain information from various parts of the Commonwealth including Australia, New Zealand and India. 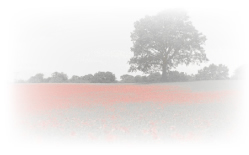 When we quietly consider what the Great War, with its gains and losses, its cares and anxieties, has taught us, we are at once struck by the splendid heroism of all who took part in it. Many by reason of special qualities of mind or soul stand out more prominently than the rest ; but the names and deeds of others, who toiled no less meritoriously, are officially left unsung. Learn more>>

"The two Officers were wonderful. They were not only up and down the trench keeping the men in good heart, but they did excellent work with the bombs themselves. The part they played has been the talk of the battalion since"

Find out if your Family relatives served in World War I ... using the National Roll database

The Great War - a soldiers contribution

Volunteering in May 1915, he proceeded four months later to the Western Front. There he played a prominent part with his unit in many important engagements including the Battles of Loos, St. Eloi, Vimy Ridge, Arras, the Somme I, Ypres III, and the Somme II, and was wounded at Amiens in August 1918.

He was awarded the Military Medal and bar, for bravery and consistent devotion to duty in the Field, and when demobilised in January 1919 was also entitled to the 1914-15 Star and the General Service and Victory Medal

Below is a brief list of other collections that may be of interest.....

A valuable collection of the serving officers of the Royal Air Force.

As the junior service - the Royal Air Force was born out of the amalgamation of the Royal Flying Corp and the Royal Naval Air service towards the end of the First World War. Renamed in 1918, its role became increasingly important as it helped to maintain Britain's strategic interests from Gibraltar to Cairo taking in Palestine, Jordan, Iraq and India.

Sir Hugh Montague Trenchard headed the Service and the structure from the department of the Secretary of State of the Air Ministry down to lowly stores depots are fully detailed with every serving officer featured, including name, rank, date of seniority, unit and location. Recipients of the Victoria Cross, deaths and the retired list for the year provide added information.

You can begin to create and build your Family Tree online absolutely FREE, add photos, stories and war time experiences of your ancestors. Leave a lasting legacy of your family history. 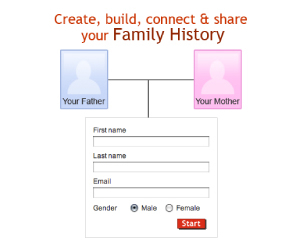 Starting your family tree has never been easier or quicker and it is completely Free.......

Start your family tree for Free

Please Note: that NEW DATABASE collections refers at time of going to press on Familyrelatives.com